Among the slander and libel hurled at the Jewish State, the idea that Israel is an illegal colonizer of Palestinian lands is prevalent among staunch Israel-haters and antisemites.  They charge that the establishment of the Jewish State was not legal and hence, Israel is a rogue nation which skirts international law.  This, coupled with the entirety of the onus for making peace being hoisted on Israel is unfounded and can not be backed up by historical data.  Israel is a state that was legally founded and was recognized by the UN.  The Jews who founded Israel had legal rights to the land declared a state in 1948.  Far from being interlopers, the Jews already had significant population centers in the Holy Land dating back a century or more before the end of World War II.  Early Zionists legally purchased land from the former land owners and therefore were not colonizers, but legal land owners with absolute rights to their property.  The creation of the Jewish State led to several wars against Israel which the newly founded nation won against every odd.  Still, Israel has made many appeals to its neighbors for peace and has even given up large swaths of land for the promise of a future without war.  Israel has proven time and again that they are willing to make concessions in the name of a lasting peace and a secure future.  What have the Palestinians done to that end?  What have they done to show that they are ready for a peaceful future.  We often hear politicians say that “the Palestinians deserve a state.”  But what evidence is there to support this claim?  What have they done to promote peace in the region?  What steps have the Palestinians taken to prove to the world that they want to live in peaceful coexistence with their neighbors?

The myth of Zionist colonialism 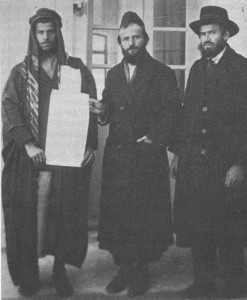 Most of the land that the early Zionists bought was sold to them by the, mostly Arab landlords. Arabs sold the land from under their fellow Arabs.  While your heart may break for those tenants who were no longer able to live on the land after it was sold, is not in any way indicative of colonialism nor does it violate international law.  A new landlord can decide he wants to live on the land rather than renting it out.  It is within his right to determine how his land will be used.  Property ownership is not conquest.   As for Judea and Samaria, the land was legally a British mandate after the Ottoman empire fell, leaving it’s ownership uncertain. As the British prepared to relinquish their rule over the mandate, an offer was made to the Arabs and the Jews to split the land based on population centers. The Jews accepted this as fair and the Arabs said no. When the mandate ended without a legal status for the land, the Jews declared a state in the small portion of land allotted to them in the proposal. The newly formed state, in it’s declaration of independence, asked it’s Arab neighbors to join them in forming a country in which their rights would be respected and defended.  Many Arabs took the offer and Israel today has a large Arab population who enjoy more freedom than any of their Arab neighbors in the Middle East do. Israel was accepted into the UN as a nation and the Arabs attacked the following day. All of the surrounding Arab countries proudly called for finishing what Hitler had started.  The Jews were grossly outnumbered and it was expected that the Jewish state would see it’s end in record time. But that did not happen.  The newly formed Jewish state shocked the world by fighting off the invading Arab armies and winning the war. During the course of the defensive war it was forced into, Israel pushed the Arab armies to the West bank of the Jordan River. In 1949, a ceasefire was agreed upon, which established the, so-called “green line” as a marker of where each army would remain. This land was not a part of Jordan and was being illegally occupied by the Jordanian military.  The Armistice agreement with Jordan specifically stated that this would not be seen as a final border, but as a temporary ceasefire line.  The reason for this was not because Israel wanted to colonize Arab lands in the future, but because Jordan wanted the opportunity to push further into the Jewish state in the future.  These lines were adhered to until 1967 when the Jordanian army began to amass it’s troops along the green line, as other Arab armies began to mobilize their troops for an attack on Israel as well. Israel recognized the threat and took preemptive action and won the war in less than a week.  In the process, Israel annexed land that gave them a clearly necessary military advantage over their hostile neighbors and allowed for a buffer zone. This land was illegally occupied by Jordan at the time and, prior to that had no legal designation. Hence, it did not belong to Arabs or Jews under international law.  Israel later signed a peace agreement with Jordan and in it, Jordan agreed that its borders would end on the east bank of the Jordan River. Because Israel was defending itself, it had the legal and quiet frankly, the ethical right to capture those lands.  It was not until the end of the Six Day War that the Arabs living in the former British mandate of Palestine began to call themselves Palestinians. In fact, the term Palestinian was, up until then used to refer to Jews living in Palestine. The Arabs were Jordanian or Egyptian or Syrian or Iraqi, etc…  There was no Palestinian national identity until after the war in 1967.  As Zahir Muhsein, former commitee member of the PLO said to a dutch newspaper in 1977, “The Palestinian people does not exist. The creation of a Palestinian state is only a means for continuing our struggle against the state of Israel for our Arab unity. In reality today there is no difference between Jordanians, Palestinians, Syrians and Lebanese. Only for political and tactical reasons do we speak today about the existence of a Palestinian people, since Arab national interests demand that we posit the existence of a distinct “Palestinian people” to oppose Zionism.  For tactical reasons, Jordan, which is a sovereign state with defined borders, cannot raise claims to Haifa and Jaffa, while as a Palestinian, I can undoubtedly demand Haifa, Jaffa, Beer-Sheva and Jerusalem. However, the moment we reclaim our right to all of Palestine, we will not wait even a minute to unite Palestine and Jordan.”  Ahmad Shukeiri, one of the PLO’s founders stated in front of the UN that, “such a creature as Palestine does not exist at all.  This land is nothing but the southern portion of Syria.” 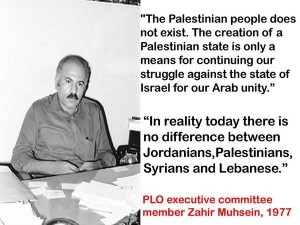 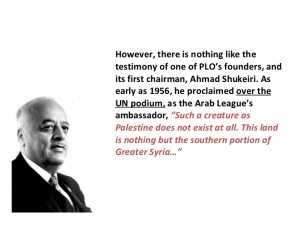 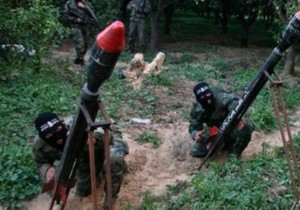 Despite their calls for its destruction and their stated goal of murdering every Jew in the Holy land, Israel has given the newly invented Arab Palestinians plenty of opportunities for peace. All were rejected.  Israel has shows its willingness to give up land for peace on more than one occasion. The Sinai peninsula, an area twice the size of Israel rich with oil deposits was given back to Egypt for peace and that peace has lasted decades. Israel and Jordan agreed to land swaps to meet the water and land needs of both countries and that agreement, too has sustained. The Jewish State has made numerous concessions to the Palestinians just as a condition for them to negotiate and yet they refuse to negotiate. There have been several legitimate and reasonable proposals made to the Palestinians for peace.  Some were hailed by world leaders as monumental steps toward establishing peace for both peoples.  Some were even suggested by American, Arab and European leaders.   All were rejected by the Palestinian leadership.   Israel has proven that it is willing to give up land for peace. It has proven that it wants peace enough to make painful decisions. In 2005, the Jewish State pulled every Jew out of Gaza, some by force.  Today not a single Jews remains in the coastal enclave.   Soon after,  Gazans elected Hamas who murdered members of the opposing Fatah party, throwing them off rooftops and parading their bodies through the streets in celebration.  Hamas has launched an unrelenting, decade long terror campaign against the Jewish State.   Thousands of rockets have been launched from within civilian areas of Gaza intended to strike civilian targets in Israel.   An intricate network of tunnels were built under Gaza and extending past the border into Israeli neighborhoods with the aim of attacking these communities.  For it’s part, the Fatah party has incited it’s citizens to violence.  Teaching school children that their purpose in life is to die a martyr’s death in the name of establishing a state in place of Israel.  The Palestinian Authority, run by Abbas and his Fatah party, pay salaries to terrorists in Israeli prisons.  They pay the families of those who have blown themselves up in cafes and on buses in Israel, killing hundreds of innocent Israelis.  While world leaders blame Israel for the lack of a peaceful resolution to the conflict and demand that the Jewish state make ever more concessions in the name of peace,  I would ask what evidence there is that the Palestinian Authority or Hamas want peace to begin with? What has Hamas done to promote peace? How does firing 10,000 rockets at Israel’s civilian population advance the cause of peace and coexistence? How does building a network of terror tunnels into Israeli neighborhoods show you want to live side by side in harmony? How does the PA paying thousands a month to terrorists with a pay scale based on the number of Jews killed help to build trust? How do children’s shows teaching kids to stab Jews help to bring about an end to the conflict? Israel has proven time and again that it can and will make the tough calls necessary to sign a deal with its neighbors if it means a real and lasting peace. The Jews have long since passed the litmus test for a peace-loving society.  Can the same be said for the Palestinian leadership?  Since they have declined every peace agreement that has been offered to them, isn’t it time we start asking what the Palestinians have done to promote peace and stability?