Israel’s cat population has submitted a resolution to the U.N. this week demanding to be recognized as an independent state. Israel has long struggled to cope with a growing feline population. Stray cats are everywhere in Israel and number in the millions.

“Cats are the indigenous people of Felinestan. We have been here since the days of Abraham and we deserve our own state!”, said Fluffy, a spokesman for the Felinestinians.  Felinestinians claim they are direct descendants of indigenous sand cats who once roamed the region. 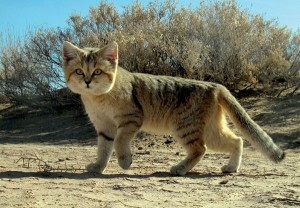 Felinestinians claim they are direct descendants of Sand Cats

Israeli officials have denied their territorial claims and have issued a statement in response. “The Felinestinians are a made up people. They’re not even people, they’re cats.  There is no truth to the idea that they are descendents of the once great nation of the sand cats.  There is no difference between a Felinestinian and a common house cat.  All archaeological evidence shows that many so-called ‘Felinestinians’ actually came from Egypt.  The rest came from the other surrounding countries only after ships carrying Jews in the late 1800’s arrived, bringing with them scores of mice and yarn. The cats showed no interest in the land until Zionist Jews created a bustling fishing industry,” the statement read. 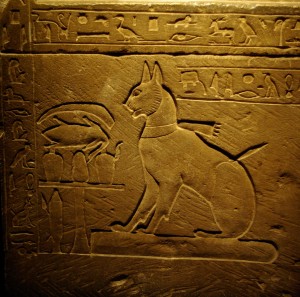 Egyptian hieroglyphics depict what some believe are ancestors of modern Felinestinians 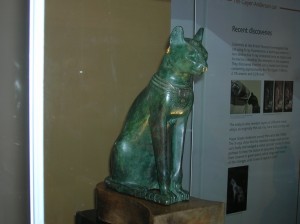 Ancient Egyptian cat statue on display at the British Museum

The archeological evidence refers to the many artifacts left behind by ancient Egyptians that bear feline resemblance. Felinestinian president, Mitzi Hatooli, in a meeting with U.N. Secretary General Ban Ki Moon, issued demands for Israel to withdraw from alleyways and dumpsters and provide compensation in the form of Meow Mix. He claimed that Israel’s policy of spaying and neutering the local cat population amounts to war crimes.  He also criticized what he called “inflammatory rhetoric” from Israeli health minister, Haim-Moshe Shapira, “claiming that we are prone to rabies and make streets smell like urine does nothing to promote a peaceful resolution to the conflict.”  Proposals have even been offered by Israeli lawmakers to deport Israel’s cats to neighboring countries, which Felinestinian leaders have called an affront to decency.
Ban Ki Moon commented during a joint press conference, “this has to stop. Cats deserve to live in dignity and be pet. Oh look, he’s purring, that’s so cute. Good kitty.” 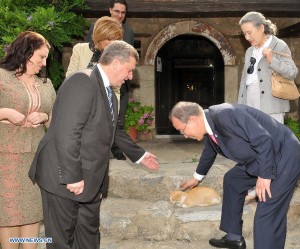 Israeli prime minister Benjamin Netanyahu responded harshly to what he called “provocations”.
“Ban Ki Moon’s one sided provocations are another example of the U.N.’s Bias.  Secretary Moon conveniently avoided mentioning the Israeli victims of Felinestinian terror.  Right now there is a six year old boy in Hadassah hospital who had to get several injections due to a Felinestinian terrorist biting him as he was crossing the street. Our prayers are with his family for a speedy recovery” said the Israeli PM said in a statement posted on his official Facebook page late yesterday morning.  There has been a recent surge in clawings and bitings, mostly in the old city of Jerusalem, causing some Israeli officials to take a hard line against the Felinestinians. IDF dogs have been dispatched and several cats have been killed in skirmishes. 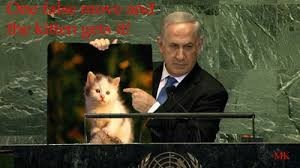 Swedish foreign minister,  Margot Wallström said in an interview for Cat Fancy magazine this week that all of the world’s feral cat problems would go away if Israelis would give the Felinestinians the state they deserved and agreed to be driven into the sea. U.S. president, Barack Obama called on Israeli leaders to restrain their dogs.  In Iran, members of the Asiatic Cheetah brigades have vowed to support their feline brothers saying, “their fight is our fight, we support the Felinestinian struggle against the Zionist regime and will do what is in our power to secure freedom and fish for our brothers.”

In recent weeks, Israel has intercepted several shipments of catnip found to contain laser pointers.  The Israeli government currently limits the transfer of laser pointers and those sticks with a little fuzzy ball hanging off it to Felinestinians.  The move is justified, officials in the Israeli defense community say, as these are “dual use” products which can be used to make weapons.  Human rights groups have claimed that this is a violation of human rights.  Israelis argue that cats are not entitled to human rights because they are not human.  Israeli leaders have called for a summit to discuss peace negotiations.  They asserted that peace can only be achieved with two states, side by side, with a declawed Felinestan. Palestinians, for their part, feel that the Felinestinians are taking attention away from their cause.  A Palestinian spokesperson was quoted as saying, “what the hell, man? They’re stealing our schtick!  How are we supposed to compete with that for world sympathy? They’re cute and cuddly and look so adorable when they roll on their backs with a toy. Now we’ll never get a state! I’m going back to Jordan where I came from, this is nuts!”

3 thoughts on “Israel’s Cats Demand Their Own State”