Idiot protesters on Broadway in NYC. I had to say something…
These nuts in a nutshell are the Westboro Baptist Church of Judaism.

Upon leaving his office in the financial district of New York City on that warm night in August, writer, entrepreneur and social media guru Matt Sweetwood had no idea he would be confronting a group of anti-zionist Hassidic protesters waving banners calling for the destruction of the Jewish state.  These kinds of things just seem to happen to him, he says.
Though his contributions to The Huffington Post, his social media accounts and his website may show scarce indication of his “Jewishness”, Matt describes himself as “fiercely Jewish…fiercely protective of Israel”. 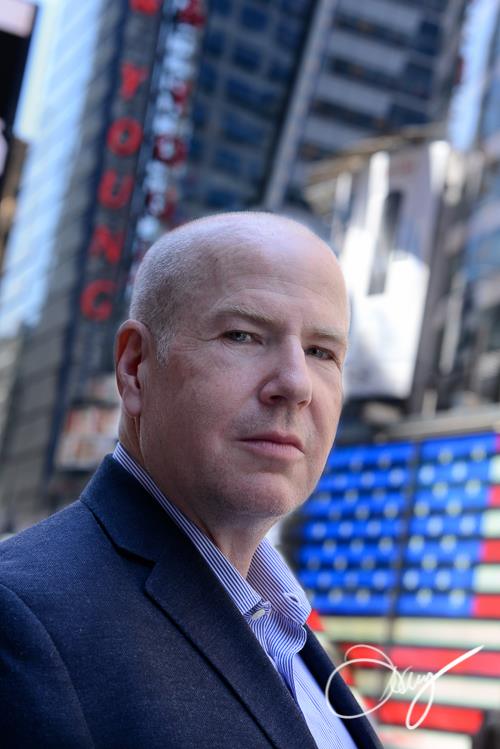 Matt Sweetwood is a writer, entrpreneur and President and CEO of BeBee USA

He couldn’t sit idly by when he saw the words “cheap Jew” embedded in a sculpture and had it removed within 6 days of publishing his first of several articles about it.  Likewise, Matt could not allow these fanatics to taint the image of Jews everywhere.  Disgusted by what he was witnessing, Matt approached the men and began to engage them.  Without threats of violence or even a hint of anger in his voice, Matt questioned the men about the goal and merits of their protest.  Within seconds, the words “evil Jews” came from one of the protesters mouth and Matt knew he had them.   This was not surprising to him.  He expected that the men would utter some hateful message, as they have been become known for it.  He knew that through lack of substance to their position, when presented with irrefutable facts, they would abandon reason and resort to hateful rhetoric.  He just didn’t expect it to come so quickly.  Matt immediately posed the question to them: how they could possibly justify speaking so negatively against other Jews and call themselves strict adherence to the religion when Judaism forbids it.  Matt was referring to the laws in Judaism against “Lashon Hara”  literally meaning “Bad Tongue” which prohibits speaking ill of anyone, but especially of other Jews.  The sin of Lashon Hara carries as much weight in Judaism as all of the other sins combined.  Several of the prayers on Yom Kippur, the Jewish day of atonement, center around asking forgiveness for hateful, deceitful or otherwise hurtful speech.  Matt was beating them at their own game.  If these protesters were going to cite adherence to scripture as their reason for being there, Matt was going to show them their hypocrisy.

Matt was, almost like clockwork, even more justified in his actions when a group of Arab women in hijab began to laugh and take pictures of the scene.  In this instance, Matt would have preferred to be wrong, but his point was vindicated.  These men were making a laughing stock of Jews the world over.  “That’s now going to become propaganda against us,”  Matt told us.  Matt was furious at these men, but held back his anger and continued calmly.

He noticed one of the men on his cell phone and suggested that the men smash their cell phones (essentially every mobile phone uses Israeli technology in it) in support of the boycott of Israel which they claimed to be for.  Within mere minutes, Matt had shamed these misguided men thoroughly.  They did their best to ignore him and even attempted to chant over him. Others on the street, Jews and Israelis and some non-Jews soon joined in ridiculing these hateful protesters.  With minimal effort, Matt was successful in bringing onlookers in to join him in calling out the hypocrisy and lunacy of the two protesters.

After posting the video of the interaction, Matt said that Jews and non-Jews alike praised him for being able to maintain his composure while calling out such blatant hypocrisy and hatred.  He received an outpouring of support and said that he had not seen a single negative post on his video, which at the time of writing this, has over 40k views.

Though not observant, Matt is proud of the Jewish people and of Israel and makes an effort to instill this in his children.  “Don’t think that when I’m walking up to them, that in my back of my mind I don’t know I’m setting an example for my children.”  It seems that Matt’s lesson’s to his children have not fallen on deaf ears.  His daughter was recently married in Israel and his son works for an organization that fights BDS on campus.

Matt felt the need to confront the men because he felt they were misrepresenting Israel.  He’s not wrong.  The hassidic men in the video are part of Neturei Karta.   They are often cited by antisemites as an example of “good Jews” or to prove that “not all Jews support Israel.  But who are the Neturei Karta?  How did they come to hate the Jewish state with such fervor?  How do seemingly religious Jews come to develop such disdain for the idea of self-determination for the Jewish people?

To prove just how lost on them the concept of irony is, Neturei Karta were founded and are based in Israel. Their largest numbers are in Beit Shemesh and in Jerusalem.  They believe that Israel has no right to exist as a Jewish state and they see themselves very much as the only “true” Jews.  Neturei Karta claim that Israel shouldn’t exist and indeed that it is an affront to God.   The very idea of Jewish self-determination, they argue, betrays the “Three Oaths” made between God, the Jewish people and the rest of the peoples in the world.  Through this oath, the Jews agreed to not fight the nations of the world and the world agreed to not oppress Israel “too much”.  No Joke, it says “not too much”!!!  We should be thankful for that agreement, I guess, because according to Neturei Karta, the holocaust, the inquisition, the programs and the centuries of death and persecution still miraculously fall under “not too much” persecution.  We would hate to see what too much looks like.  So based on this belief that Jews violated the oath and should have waited in pogroms and ghettos in fear and starvation for the Messiah to save them, Neturei Karta feel it is their duty to work against the state of Israel.  And they certainly do work against the Jewish State.  One of their members once served under arch terrorist and PLO leader, Yassir Arafat as his “Minister for Jewish Affairs”(whatever that means).   When Matt Sweetwood said that these are Judaism’s own version of the Westboro Baptist Church, he was only partially right.  While, like the Westboro church, they preach hate and celebrate terror in Israel and elsewhere as “God’s will”, this group is far more nefarious and dangerous.  They have dined with terrorists in Gaza and even attended a holocaust denial conference in Iran with former president and outspoken antisemite Mahmoud Ahmedinejad. Members of their organization have been convicted of spying for Iran and their more radical members have even committed acts ofterror and violence against Israeli citizens and government officials.  The group celebrated bombings both within and outside of Israel.  Netruei Karta have certainly earned their status of being shunned by even the most radical Jewish groups.  Hassidic Judaism has washed their hands of them.  Even the radically anti-Zionist Satmar Jews have denounced them as radical and dangerous.  Yet they are held up as a model of what all Jews should be like by antisemites the world over, violently anti-Israel.  Neturei Karta have disgraced the name of Judaism and given ammo to our enemies.  BDSGuide.com is thankful that one man had the courage to confront them and show the world their utter hypocrisy.  Thank you Matt Sweetwood, you are a true inspiration!